Qatar reported its first case of novel coronavirus on February 29, 2020, and the government immediately implemented a 14-day period of quarantine for any person, whether nationals, expatriates, or visitors, arriving in the country. To tackle the increase and spread of the virus among the population the Ministry of  Public Health (MoPH) formed the Supreme Committee for Crisis Management in early March. This special cabinet was declared as the authorized body on coronavirus information and was tasked with drafting and implementing measures and policies to contain the spread of the virus. To read about various containment measures undertaken by the State of Qatar (and other GCC countries), click here.

The graph below illustrates the timeline of daily cases in Qatar as well as the various measures introduced. Hover over the marker (blue in color) to see the measures and the dates they were implemented. 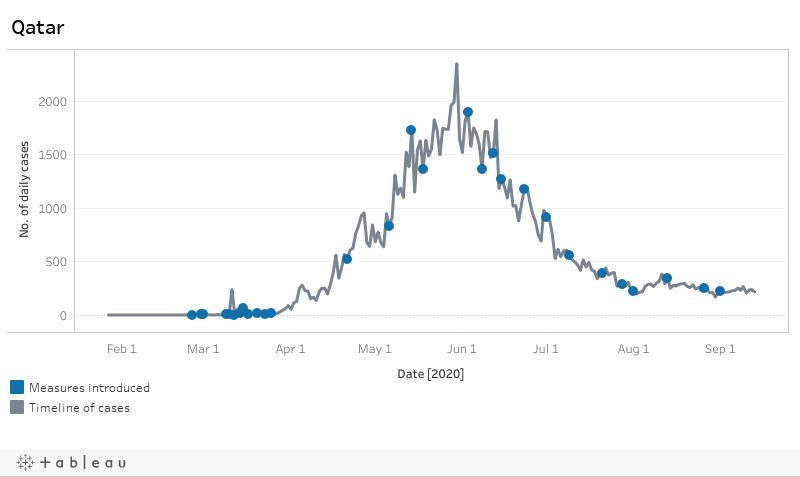 As indicated by the red color in the illustration above, the density of the number of cases per population in Qatar is the highest in the region. With over 100,000 people, or approximately 3.8% of the total population identified as COVID positive, by early July 2020, Qatar demonstrated one of the highest proportionate rates of infection. Globally, states have been benchmarking the progression of the virus on their territories and among their populations by sharing data on the number of positive cases identified per million people. With a small population of 2.783 million, this figure is particularly startling for Qatar, as it is close to 40,000 cases per million, while in many other parts of the world with far higher overall COVID cases, the per million breakdown is usually well under a thousand. Qatar’s rate of testing is also high as to date there have been 152,713 tests carried out per million, and its case fatalities per million very low at 53. By way of comparison to other small states, San Marino that has a very small population size has a fatality rate of over 1200 per million while Belgium, with a population of over 11 million,  has 844 recorded fatalities per million. As a very small state, where the citizens number less than 350,000 and foreigners make up over 80 percent of the population, Qatar’s demography has always been unusual and the COVID data currently available on the state continues to reflect this.

A reason for the low fatality rate In Qatar may be due to a high proportion of the population in Qatar being young and presumably without underlying health concerns. With the elderly population (55 years and above) constituting only 4% of the population, Qatar, unlike many other global epicenters of the virus, has witnessed a low death rate due to the virus, particularly among its older population. Despite the relatively high number of overall cases that Qatar has reported, critical cases have largely remained low, and by July the data indicated that the vast majority of people had recovered. Out of the reported cases, 93% are mild, 5% are seeking medical treatment and only 1% are in the ICU. The low death rate in the country can also be attributed in part due to the country’s adequate healthcare system and to the early detection of the cases. Anyone who tests positive for coronavirus immediately receives high-quality medical treatment at relatively low or no cost. The robust health care system and a high proportion of young people have helped keep the COVID-19 fatality rate one of the lowest in the world.

During the early stages of the outbreak, migrant workers, who make up a significant component of Qatar’s demography, were identified as one of the most at risk segments of society. Frequently living in overcrowded labor camps and contending with work conditions, where social distancing is difficult, migrant worker communities in Qatar experienced a sharp rise in cases of the virus in March and April. In order to address these outbreaks, the Qatari government swiftly imposed measures to mitigate the spread, such as imposing a lockdown on the industrial area where many blue-collar migrant workers live, setting-up mobile medical clinics and screening units, as well and undertaking sanitization of buildings and vehicles located in the area. While concerns were raised about the human toll of some of these efforts, through these sweeping measures the government was able to track and subsequently significantly reduce the spread of the virus among the migrant worker community quite rapidly. Subsequent peaks in cases were not just confined to the migrant worker population but also white-collar foreign workers and Qatari citizens. An increase in positive cases was also reported due to the expansion of national testing efforts. The government’s efforts in actively seeking and tracking the positive cases have resulted in early detection and reporting of positive cases in the country and have enabled the authorities to take appropriate measures to tackle the situation.